Henna grows in hot climates and can be found in most Middle Eastern countries such as Iran, Pakistan, Syria, Persia, Morocco, Egypt and India. We have found Indian henna to be the best for mehndi. The henna plant (Lawsonia inermis) is 8 to 10 feet high and its leaves are dried and crushed to make henna powder. The natural dyeing properties found in henna are tannins. Synonyms for henna are henne, Al-Khanna, Al-henna, Jamaica Mignonette, Egyptian Privet and Smooth Lawsonia

The history and origin of henna and it's uses is hard to track, with centuries of migration and cultural interaction it is difficult to determine where particular traditions began, though there is some historical evidence that mehndi as a ceremonial art form was originated in ancient India. But others believe the Moguls introduced the use of henna to India in the 12th Century. It has been used for at least 5000 years as a cosmetic and for it's supposed natural healing properties. There is documentation from archaeologist that in ancient Egypt that henna was used to stain the fingers and toes of Pharaohs prior to mummification.

The art form of applying henna (known as mehndi, mehandi or mehendi) varies from region to region. The varying designs can mean different things to each culture, such as good health, fertility, wisdom and spiritual enlightenment. It spans different cultures and religious traditions, thus making it possible to recognise distinctions in cultural style. Arabic mehndi designs are generally large, floral patterns on the hands and feet. Indians doing mehndi use fine, thin lines for lacy, floral and paisley patterns covering entire hands, forearms, feet, and shins. African mehndi patterns are bold, large geometric designs, usually black. After the henna paste is removed Africans apply a blackish paste of ashes, ammonia compounds and other corrosives to get the henna stain to turn out blackish. This is poisonous and is not a recommended procedure as there have been reported deaths from this procedure. We can only assume the reason they would go to these risky lengths is the natural color that henna stains, dark brown to dark orange, does not show up as well on very dark skin. 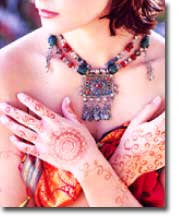 Help us Improve
© 2001-2021   Terms and Conditions
Passionately created for you.